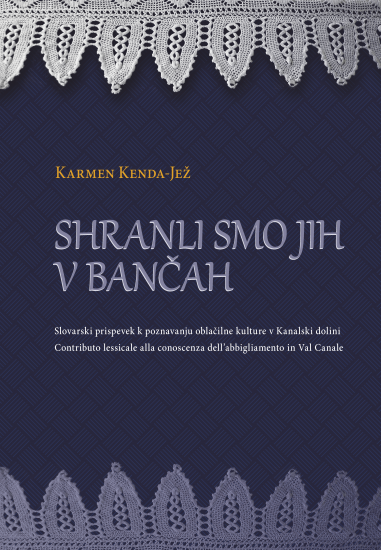 
The monograph Shranli smo jih v bančah ('We saved them in chests') aims to present Slovenian clothing terminology in the Canale Valley (Slo. Kanalska dolina). It is the result of research conducted in cooperation with the Planika Kanalska dolina Slovenian cultural centre between 2003–2007 and in 2014. It has been formatted as a trilingual (English-German-Italian) concordance dictionary in which the most common collocations are presented alongside clothing terminology. The dictionary includes 657 entries and is based on approximately 1,400 audio extracts from around 16 hours of recording of guided conversations with five informants from Valbruna (Slo. Ovčja vas), Camporosso (Slo. Žabnice) and Uggoviza (Slo. Ukve). The dictionary’s introduction, containing a presentation of the research conducted, the structure of the dictionary entries and a list of abbreviations and acronyms, is accompanied by a transcription of the dialect text Oblačila naših dedkov in babic (Our grandparents’ clothing) by the main informant, Maria Moschitz, together with some photographic material. To make searching through the dictionary easier for users with expertise in several or other languages as well, we have provided lists of entries in which dialect words can be searched against Standard Slovenian, Italian and German, as well as reverse index.