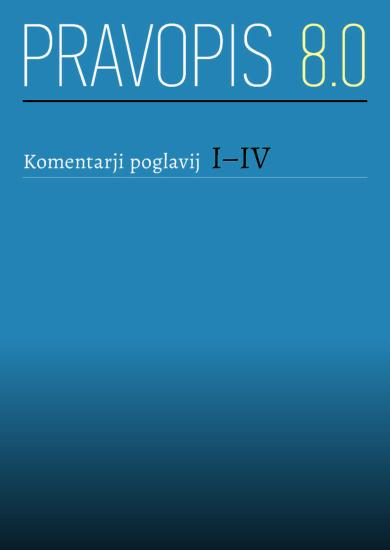 
From December 2019 to March 2021, the Commission on Orthography at the Slovenian Academy of Sciences and Arts and the Scientific Research Centre of the Slovenian Academy of Sciences and Arts published four chapters proposed to be included in the new normative rules. The proposals were published on the Fran website in a format suitable for public discussion: Written symbols (December 2019), Abbreviations (December 2019), Capitalization (March 2021), Loanwords and loan phrases (March 2021).

The presentation of the new normative chapters is supplemented by commentaries, explaining and justifying the considerations and decisions of the Commission on Orthography. The publication of all comments on the already published chapters of the Pravopis 8.0 is the result of frequently expressed desires: that all commentaries be accessible to the user and that it be possible to refer to the explanations of chapter authors, i.e. the members of the Commission on Orthography at the Slovenian Academy of Sciences and Arts and the Scientific Research Centre of the Slovenian Academy of Sciences and Arts, when writing these rules, which is typical for scientific publications.

The comments were written as justifications for the rules presented; they are primarily intended to provide explanations for those areas where the decision is not yet final and where the Commission expects new arguments to emerge in the public discussion. These arguments are intended to contribute to a more consensual decision regarding areas that have been left out or completely ignored by the language community for an extended period of time.