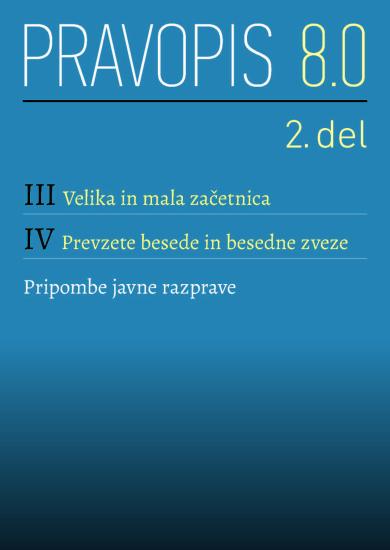 In the first part of the publication, the second two chapters of the orthographic rules were published. The chapters “Capitalization” and “Loanwords and loan phrases” were released for public discussion in December 2021.

In relation to the existing rules in Slovenski pravopis 2001, the proposal for capitalization rules was expanded and adapted for online media and public discussion. One of the most complex issues was the use of capital letters in non-initial constituents of geographical multi-word names, which is conventionalized and considered one of the narrower orthographic problems. The chapter on “Loanwords and loan phrases” aims to present borrowing as a process and to show that words can coexist in different forms – depending on the text and its type. The section on the general principles of word borrowing mainly provides the guidelines for establishing more detailed rules for borrowing from foreign languages.

In an effort to ensure a transparent process of reforming the rules, comments were collected from the public discussion. These comments were received in March 2021 through online forms or from various participants of the discussion, either individually or as a group (comments from proofreading groups or from members of media company teams).