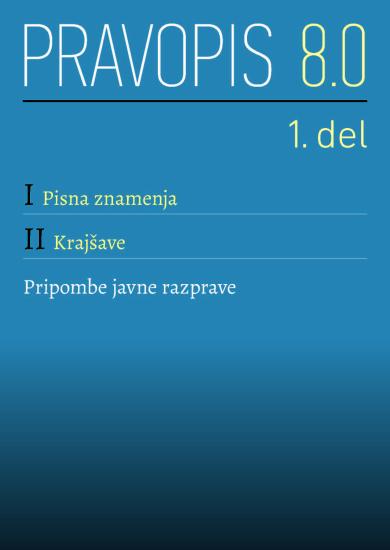 In the first part of the publication, the first two chapters of the normative rules are published. The chapters titled “Written symbols” and “Abbreviations” were released for public discussion in December 2019. In comparison to Slovenski pravopis 2001, the chapter “Written symbols” was expanded, i.e. information was added about the problem areas language users encounter when dealing with non-letter written symbols, or letters that are not part of the Slovenian alphabet, or letters that play a special role in a text (e. g., as signs or symbols). Later, when borrowing directions for foreign languages were created to further reform the rules, it turned out that the chapter on written symbols still needed to be amended. The second chapter of the normative rules is completely new; previous normative guides did not require such a detailed description of this problem area: abbreviations occurred occasionally; the codification of symbols was defined by professionals of the field in which the symbols appeared in various roles; abbreviations were considered to be indeclinable nouns or units that gradually disappear from usage and become normal words in terms of the way they are written and spoken.

In an effort to ensure a transparent process of reforming the rules, comments were collected from the public discussion. These comments were received in December 2019 through online forms or from various participants of the discussion, either individually or as a group (comments from proofreading groups or from members of media company teams).