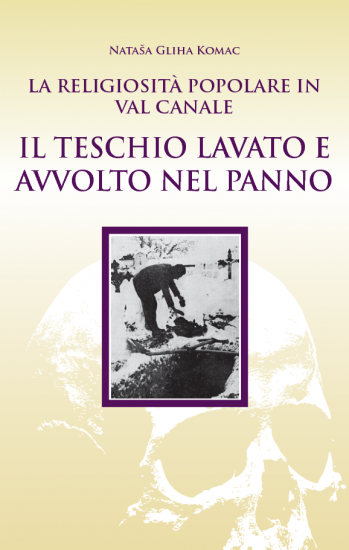 
The monograph La religiosità popolare in Val Canale: Il teschio lavato e avvolto nel panno (Popular piety in the Canale Valley: The skull that is washed and wrapped in cloth) is re-writed and updated version of Slovenian monograph Ljudska religioznost v Kanalski dolini: O umiti in v prt zaviti lobanji (2014). The book illustrates the festive year of Slovenes in the Canale Valley from the perspective of current ritualistic practices (still in use today). The identifying elements of the Slovenian linguistic community are recognizable in the implementation of various (popular) religious practices by the local population. The author presents the rituals (with selected prayer formulas), described as an integral part of their life by Slovenian-speaking informants - all of whom are indigenous, native people of the Canale Valley - that was described, from the point of view of experts in the fields (e.g. Kuret 1989) as typical of the Slovenian community in general.

There is a brief geographical and historical description of the Canale Valley, with an emphasis on the life and level of organization of the Slovenian linguistic community. The text focuses especially on the review of the history of teaching the Slovenian language as an important identifiable element of the local Slovenian linguistic community. The villages Ugovizza (slo. Ukve / nem. Uggowitz / fur. Ugovitse), Camporosso (slo. Žabnice / nem. Seifnitz / fur. Cjampros) and Valbruna (slo. Ovčja vas / nem. Wolfsbach /fur. Valbrune) are examined, which once had the largest native Slovenian-speaking population and where the ritual of washing and wrapping a skull in cloth was recorded.

Based on ethnographic research carried out to date (Matičetov 1955: 231-254, Maister 1975: 238-247) and the data acquired through guided interviews conducted with local people from Ukve, Ovčja vas in Žabnice in 1997, 2013 and 2015, the monograph continues with a comparative presentation of the ritualistic washing and wrapping of skulls in cloth, as it is described by the members of the local population. According to Matičetov (1955: 231), it is “a special custom that is performed among the Slovene population when bodies are exhumed and moved. It consists in cleaning the skull, wrapping it in a cloth and placing it back into the grave next to a new corpse.” Records of the presence of such rituals in Croatia, Serbia, Bulgaria and Macedonia are proof of the connection of this ritual washing and wrapping of skulls in cloth with the wider South Slavic area (Schneeweis 1935; Gasparini 1955; Matičetov 1955; Maister 1975; Tolstaja 1999), while recent research (Kajkovski 2014) confirm that cult of the skull was worshipped by all neighboring South Slavic nations, as early as in the early Middle Ages.