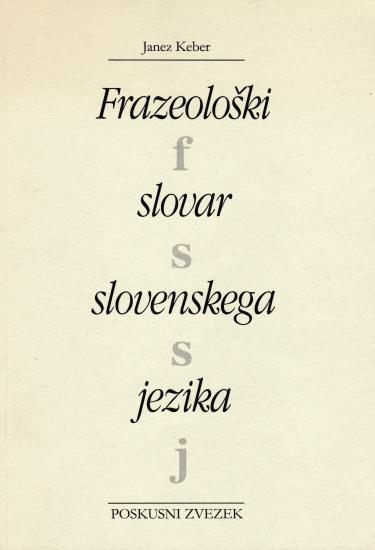 
The compilation of the Phraseological Dictionary of the Slovenian Language is one of the current lexicographic projects in the Lexicological section of the Fran Ramovš Institute of the Slovenian language at SRC SASA. The pilot fascicle consists of two parts: the introduction and the dictionary. The introductory part brings the foreword, describes the concept of the dictionary, lists the most important references and literature. There is also a list of abbreviations, followed by basic instructions on how to use the dictionary. The phraseological entries are listed alphabetically according to the content words–the constituents of a given phraseme. Seven features used for the explanation of phrasemes are elaborated in the introductory part. The most important are the following three features: (1) the illustration of phrasemes with the citations from the classic card files (which have also been used for the compilation of the Dictionary of Standard Slovenian (SSKJ) and the Slovenian Orthographic Code (SP 2001)) and with the citations from the Nova beseda text corpus (http://bos.zrc-sazu.si/s_beseda.html), (2) an explanation of the origin of individual phrasemes and (3) a comparison with equivalent or similar phrasemes in other European languages.