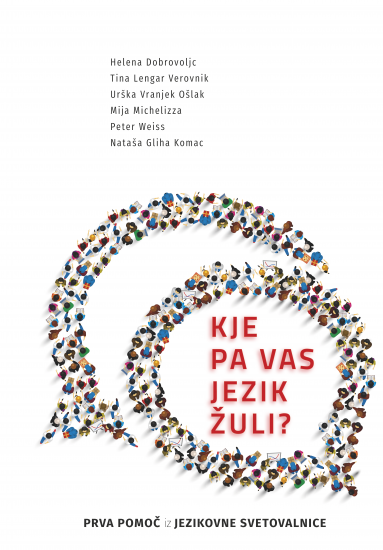 
The volume Kje pa vas jezik žuli? ('Tell Me Where Your Tongue Hurts') uses the empirical method of user experience to present a selection of language-related dilemmas that arise at various levels of linguistic structure: expressiveness, syntactics and semantics, and texts. It not only reveals the problematic areas of a language system, but also addresses stylistics and normativity—that is, the evaluation of linguistic elements from the perspective of the traditional systems of social and functional division into genres, shifts within the language, and silent changes in the electronic era that contemporary linguistics can already detect and describe.

The first two chapters present advisory activity, which forms the basis for selecting linguistic questions, and the thematic framework of the online Language Advice Forum, which has been operating at the ZRC SAZU Fran Ramovš Institute of the Slovenian Language since 2012, as it pertains to the volume. The second chapter uses survey data to present language users in terms of their demographic data, education, expressed expectations, and motivation for using the online language advice forum. The remaining chapters discuss the most frequently reported linguistic issues by topic.
This is the first comprehensive overview of linguistic problems as expressed in direct questions by language users, often specialists in specific linguistic issues, seeking a competent and comprehensive answer to a language (or linguistic) problem encountered. The volume further refines this empirically verifiable basis, treating the questions and answers in the online forum merely as an orientation point and presenting linguistic questions as syntheses of the linguistic findings established over the past decade supported by new material sources and methods, especially corpus linguistics. It is important for open issues related to the Slovenian reference grammar, normative guide, and dictionary to be resolved in critical dialogue with current manuals that individuals speaking and writing in Slovenian use daily.
Not only are linguistic changes observed in modern Slovenian diachronically, but modern methods supported by current material are also used to study potentially far-reaching shifts and changes in modern language. In its safe haven of research, linguistics is very reluctant to evaluate and contextualize these concretely, and linguistics especially refuses to take a stand on whether deviations from the traditional system are really the result of “legitimate” linguistic shifts or mere errors. Therefore this volume is an original attempt to merge the known and unknown, and to legitimize neglected deviations and linguistic simplifications. Hence, in several places the volume highlights the fact that linguistic changes reflect the natural development of a language. In this regard, it presents changes in the categorial grammar features of the lexicon (e.g., borrowed vocabulary adapts to existing vocabulary in terms of phonetics, morphology, and syntax), the simplification of syntax and hence punctuation, tendencies toward univerbation and brevity of expression, and at the same time the semantic expansion of existing lexemes, and linguistic choices pursuing increased accuracy and greater precision. In addition, the volume also draws attention to sociolinguistic (and in some cases psycholinguistic) factors that influence the flourishing of language in a period of electronic revolution through fashion, social needs, and foreign influences.